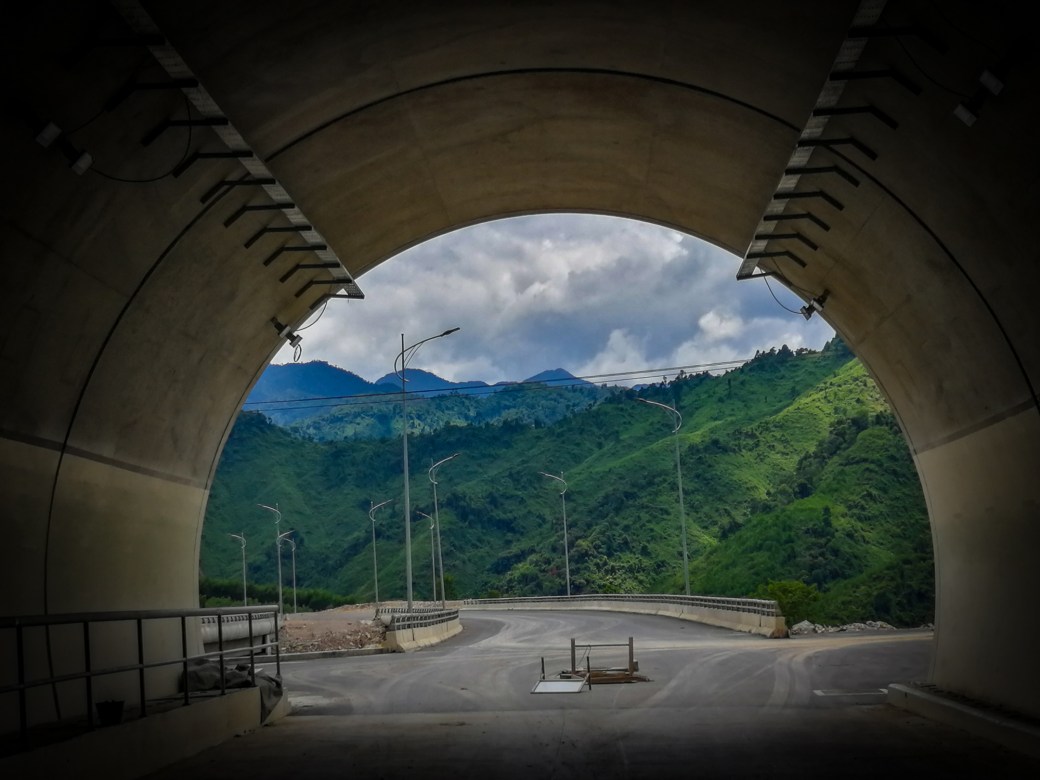 Check out a 3-dimensional video of my ride above or the Strava acticity below!

There has been chatter in the local Facebook groups about a new road to Huế. A new long distance road, maybe heading over or through the mountains? Sounds like a bicyclist’s dream! I tried to find out more and a guy called Nguyen Huu Duc (Strava profile: https://www.strava.com/athletes/7201492) gave me some useful inputs, but I still couldn’t quite figure out how to actually get on this mysterious, new road. I remembered that I had seen bits and pieces of this road when it was still in the early phase of construction during some almost-off-road riding south of the Cu Đê River about 2 years ago. So I figured the road must connect somewhere in this area. I then looked at some satellite images on Google maps, and indeed, I could follow the construction site of the new road and trace it back to where it probably connect with QL1A. I also found Nguyen Huu Duc’s ride on Strava, which gave me the last clues I needed. Indeed, the road seemed to connect with QL1A a couple of kilometers south of where QL1A disappears into the Hai Van Tunnel.

Before I headed out next morning, I mounted a second bottle cage on my bike, from which I had removed all bottle cages for the Ironman two weeks ago. My bike has to be versatile: Race-bike one day, touring bike the next day! When I stepped out at 7 am to check the weather, I was surprised how warm it was already. This is going to be a hot day!

9:00 AM, time to get on my way! Wanted to start way earlier, but if I ride by myself, getting on the road early is hard for me…VERY hard. 9 AM has to do it today…I knew that I would eat my words later because of the heat.

Once I arrived at the area where I expected the new road to connect to QL1A, I found myself driving through an unpaved construction site where truck after truck was pulling through slowly. These trucks were all heading for the Hai Van Tunnel and the construction site interrupted QL1A. Lots of dust that mixed with the sweat on my face and got into my eyes, really unpleasant! I saw a half finish road on a high stilts on the left, but since I expected the road I was looking for to be more or less finished, I kept going on on QLA1. Once I crossed the Cu Đê river, it dawned on my that I must have missed it. I considered heading west just north of the river along a road I knew from previous ride, cross the river going south and getting on the new road there, but there was no way to even get off QL1A. When I turned around, I saw the new road I was looking for heading into the mountains at quite some height…it indeed was the unfinished ramp I saw where the trucks were making all the dust. I had no choice but heading into the dust storm again. Eventually, I saw a small path heading to an improvised ramp that lead up to the current end of the unfinished road. Finally I had found my road and was on my way!

The road climbs quite high right away and you can see the Cu Đê river from the top. I now realized that approaching the road by crossing the river from the north would not have worked.

I knew that the small villages next to the road close to where it begins were the last traces of civilization before heading into remote wilderness. I had already emptied one of my water bottles, so I took the next improvised off ramp to get water in one of these villages. The ramp was steep and rocky, no way I go down that ramp on my road bike. Walking it with my bicycle shoes and pushing my bike felt like running on a cobble stone street in heels must feel. With two full water bottles I should be able to make it to the village of Khe Tre, about 50 km from the start of the road, where I expected to find more opportunities to stock up on water and food. I found stairs I could climb to get back to the road and I was finally really on my way!

The road ended up being more hilly than the GPS data I had seen from Nguyen Huu Duc’s ride revealed. I expected it to pass the mountains north of Bana Hills in the south, but it was heading right into these mountains. It still has quite some rough edges, rocks on the road, trenches not closed yet, so you have to be on guard all the time. Other than that, it was smooth riding, almost without traffic. The scenery is just spectacular!

After a while, I arrived at the tunnel. This is not the Hai Van Tunnel, of course, but a new tunnel built for this road. There are two tunnels, but one is still under construction. I knew about the tunnel and I didn’t expect it to be lit, so I mounted my lights onto my bike. It turned out that the tunnel was actually well lit. It’s quite long and the road in the tunnel climbs until half way through the tunnel and then descents, so you can’t see the other end until being close to it. Be careful in there, because most Vietnamese people I saw going through the tunnel didn’t switch their lights on.

On the other side of the tunnel the road keeps climbing into the mountains. Here the road is not running next to the river anymore.

The major climb starts after the tunnel. It’s not particularly steep (4% max) and not very high (300 m), but it still impacts travelling speed. A look at my watch told me that it was 11:30 AM…lunch time in Vietnam! I was still quite far from the next village, Khe Tre. I was looking forward to some Mì Quảng or Bún (both noodle dishes typical for Central Vietnam). Eventually, I reached the peak and the road started to descend. Still, Khe Tre was not in sight. I was getting worried that I might miss lunch time (which in Vietnam is from 11:30 to 11:35…then the entire country resembles an area after a nuclear blast: no people to be seen anywhere). I tried to look at the map using Google Maps, but of course I didn’t have cell phone reception in the middle of the wilderness. I also did some math in my head: My odometer showed me that I was 70 km into the tour. If it takes me as long to go back as it took me to get here, I might not even have enough time for a decent lunch break.

Finally, some houses started appearing on the left….this must be Khe Tre…way smaller than I expected, really just a couple of huts! I started to write off my lunch plans altogether, hoping that I could at least find water to refill my bottles.

I found an improvised, unpaved off-ramp that I walked down. Once in the village, I didn’t see any of the typical signs announcing small businesses selling food, water,….oh, oh, I might be in trouble! Good thing I had packed enough energy gels to take me through the ride worst case, but what about water?? In front of one of the houses I saw a machine to press juice out of sugar cane, called Nước Mía. Some dirty cups and a tea pot were sitting on a table. A young man appeared and he opened a box with ice and cool drinks for me. I grabbed two Red Bull, something Vietnamese that turned out to taste the same as Red Bull, and a big bottle of water. It started to dawn on my that these Red Bulls might end up being the the lunch I’ll get today. I sat down and the man was nice enough to switch on the fan, but then he sat right in front of the fan, smoking a cigarette (most Vietnamese men are heavy chain smokers). I didn’t want to inhale his smoke, so I moved my chair a little bit. He was sensitive enough to get the message and moved to the side a little bit. With my limited Vietnamese, I asked him whether I could find some noodle place close by. He told me to head 1 km further down the road, which I did, but all places were deserted, as expected. It was 2 pm by now and I had to get on my way back home.

I found a stairway that got me back to the road and I was on my way back home! Both of my water bottles were full and I hoped that the first bottle would last until the top of the climb. Well…it didn’t! By the time I reached the foot of the climb, the first bottle was already empty! I realized now that I’m probably going to run out of water before I would see traces of civilization again! I started rationing my remaining water, only taking 3 sips each time I drank, eventually even only two.

At some point of time I saw a bottle lying on the street and I couldn’t help laughing because I was really tempted to pick up that bottle! I stopped at a waterfall to try to get some water. A stairway led down to the river, but barb wire made it impossible to actually get to the river, so I had to continue my journey without being able to pick up new water. I was making good progress, though, and I figured that my second bottle would be enough to take me to the begin of the road. When I finally got to what I thought would be the last climb, I emptied my second bottle. From now on it was going to be dry riding in 39 C!

When I arrived at the begin of the road, I decided to try QL1A in the other direction to see whether there is easier access to the new road from the north. There isn’t, because there are simply no off/on-ramps to QL1A until you almost reach the Hai Van Tunnel. This is where I turned right. Finally I reached an intersection that had 6 cafes! I thought I was seeing a mirage! I downed two Revive electrolyte drinks and had a terrible coffee. On my way again, tail winds pushed me ahead nicely along NTT (I call it “The Other Beach”), but I had another re-hydration break at a small store I knew, drinking another Revive. All in all, I had consumed between 8 and 10 liters of liquid! My odometer showed 157 km, my muscles actually felt okay, but I kept being very thirsty. I had started the ride at 9 AM in the morning and I arrived at home at 7 PM, 10 hours of riding, breaks and photo stops included.