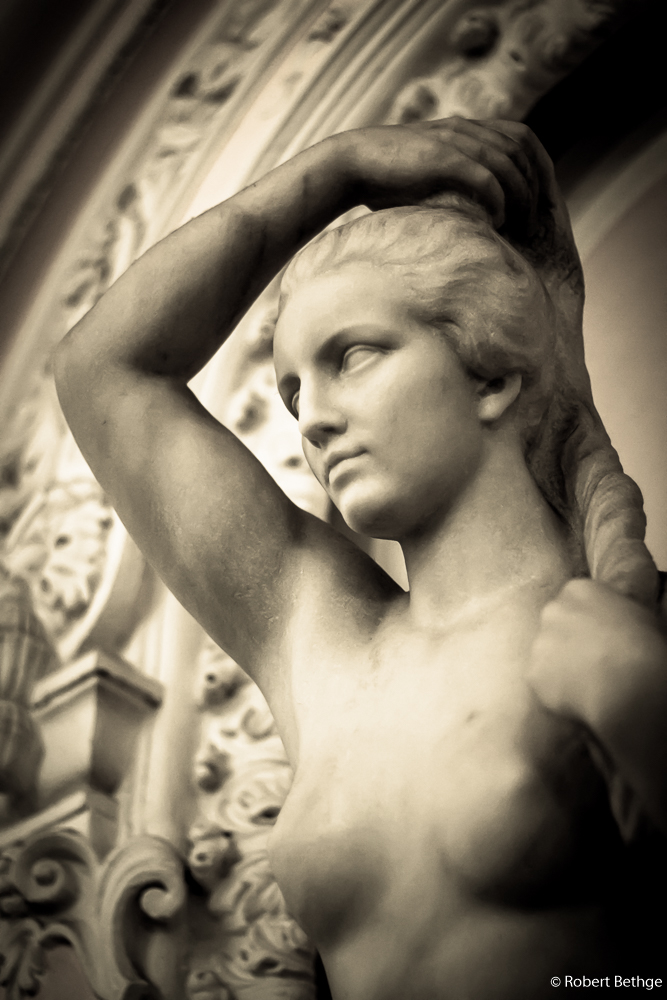 Sometimes I shoot pictures and I know “this one is not going to turn out…”. “So why are you still shooting it, then?” you might ask. Well, good question. Maybe I just have the itchy finger…maybe I’d like to experiment, and somehow I live by the motto: Better having one shoot too many on your card than thinking later “I should have taken that shot!”. And then sometimes, these “hopeless shots” develop a life of their own, turn into something very unexpected. This is what happened with the shot discussed here.


I had been shooting all evening at the Hero’s Place in Hungary, and, since we were already in the area, we also went by the Széchenyi Thermal Bath. Well, turns out they were already wrapping things up there, so we couldn’t get inside. While figuring out the opening hours, I saw this statue in the entry hall, but it really terrible lighting. No contrast, no colors to speak of, so I knew the picture wouldn’t turn out. But, blame my itchy finger, I took the shot, and then at home I started experimenting with the picture. The first picture on this post shows the image how it came out of the camera. Not much of a surprise. Low contrast, low color, lots of noise. Then I thought “why don’t I experiment with the Lightroom Presets a bit on that one?”, so I used the “Cold Tone” preset. Hm, quite interesting. Still not much color though, so I converted it to a Black & White. Increased contrast, reduced noise, introduced a nice, aged-looking vignette and, voila, you see the result in the second picture. Not all that bad, definitely not hopeless! So, give your hopeless shots a chance (but hey, this is NOT an excuse to go and shoot everything now…)!