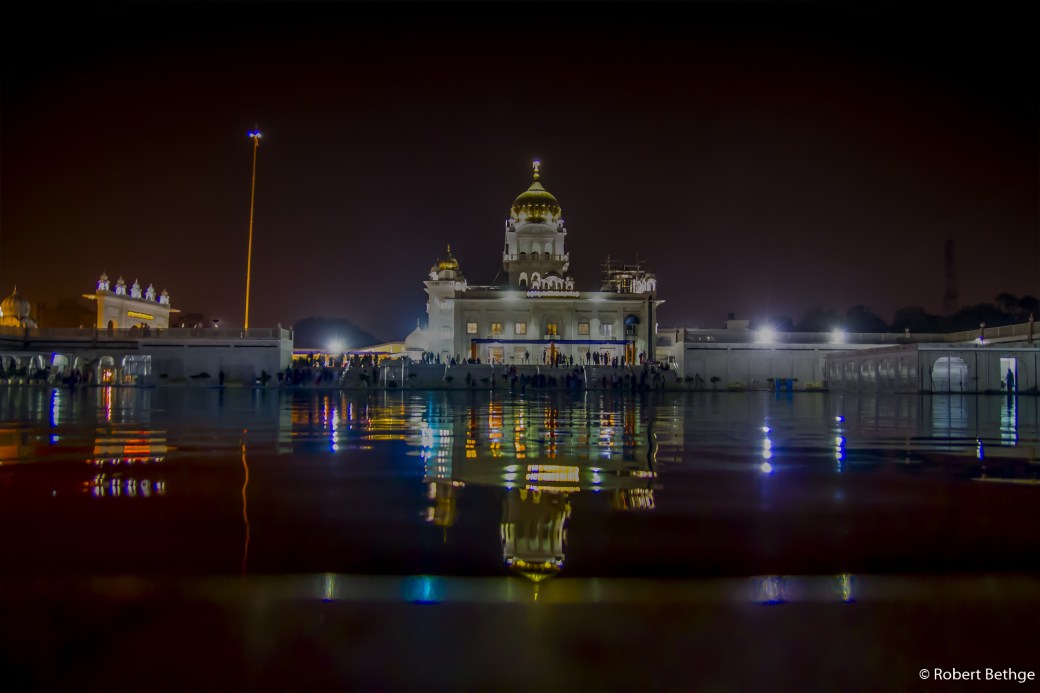 A Colombian friend I had not seen for years called me up while I was still in Greece and told me that he was attending a meditation event in India and asked me to meet him. Imagining the world map in my mind, I was drawing a line between Greece and Thailand, where I was heading next and concluded that New Delhi was close enough to that line. It had turned out that Emirates Airlines had screwed up my ticket to Thailand and had granted me a full refund, so I needed to buy a new ticket anyway. So why not having a layover of a couple of days in India?

Just before I booked my new ticket I found out that India is one of the few countries that actually require a Visa from Germans. Small bump in the road…but there is an online process called e-Visa and after some hick-ups with my credit card I was able to submit the application and the Visa was emailed to me a day later.


Once I landed in New Delhi and had gotten back my luggage and my beloved bicycle, I bought a SIM card, left the bag with my bicycle at the left luggage at the airport and was on my way to a room I had booked on AirBnB (won’t do that again: hotel rooms are dirt cheap in India, no need to pay inflated AirBnB prices…). After a couple of hours of sleep, I headed out to meet my friend, who I was very happy to meet again after such a long time. After chatting for a while in a cafe we decided to hire a driver and check out some of the attractions in the close proximity.

Our driver first took us to the India Gate (for some reason it’s not called Indian Gate, but India Gate. Very subtle difference!), which looks a bit like an unfinished version of the Arc de Triomphe in Paris. The structure is impressive, albeit not necessarily beautiful. What’s more interesting than the actual gate is all the action around it.

The next station on our trip was a Sikh temple, or rather, a “Sikh house of worship”, or Sikh gurdwara. You can read specifics about this temple at Wikipedia. Our driver drove into the garage next to the worship complex and like all other visitors of the temple, we took off our shoes in the garage already. Once inside the temple, we were asked to cover our hair with colorful scarfs that were provided to us.

We stepped into the first hall, where at 10 PM a religious ceremony was in full progress. There was chanting to a simple beat and a flurry of activity. The Sikh look very exotic, maybe even intimidating to us, with their turbans and long, often white beards. All Sikhs I’ve met or seen so far were extremely nice, though, and this would be no exception. I remember a Sikh explaining on US TV: “People sometimes think we look like the Taliban, but we’re very different.”

It didn’t take long and I was invited to join the ranks of the praying people. I’m sure that doesn’t happen in many religions. I felt a bit uneasy, fearful of doing something wrong, but I couldn’t resist getting that close to their religious rituals.

Eating with the Sikh

Eventually, I wandered off to continue the tour of this immense complex. Many people disappeared into a door to some quarters that seemed a bit more hidden. I couldn’t help peeking inside and, curiosity killed the cat, promptly got invited by a white bearded Sikh to come inside. I had lost sight of my friends at the praying ceremony, so I stepped into these quarters quite hesitantly, wondering where this would go. It turned out that this is where the Sikhs eat. People were sitting on the floor, large, silver plates with food in front of them. The man who had asked me in pointed at one of these plates and invited me to sit down. Again I hesitated, being the only foreigner to be seen in this simple banquet, not knowing whether it would be appropriate to join them. Curiosity got the better half of me again and I saw myself sitting down, looking around to see what the others were doing. I couldn’t help noticing that people were eating with their bare hands… I eat even chicken with knife and fork! Not wanting to put myself apart, I also started eating with my bare hands. Some kind of curry with an Indian type of bread. It wasn’t exactly delicious, but not bad either. The water had a bit of a foul taste to it, like mold, and I imagined myself spending the rest of my trip on the toilet of my AirBnB room. Eating with my fingers turned out to be more difficult than I expected. I tried my best to not have the curry drip on my camera, which I had in front of me. Almost everybody in the room was watching me. First I thought that they were upset that a “non-believer” had joined them, but then I realized that they were simply amused about my insecurity and clumsiness. The white bearded man sat down with me, explaining things to me, but he didn’t speak much English, so I’m not sure what exactly he was talking about. Another guy eventually told me that I can use the spoon that was provided. That made things a lot easier…. It even encouraged me to get some more. In the Wikipedia article above I read that the Sikh actually feed people that are not of their faith. I now noticed that most people had finished eating and the bearded man indicated to me that it was time to wrap things up. I brought my plate to the dish washers and left the eating quarters, not without saying goodbye and thanks to the very friendly white bearded man. If all religions were as inclusive as the Sikhs, we wouldn’t have many of the problems in the world!

After leaving the eating hall, it was time to look for my friends, but not before taking pictures of the huge, beautiful pool inside the complex. My friends were patiently waiting for me at the exit.