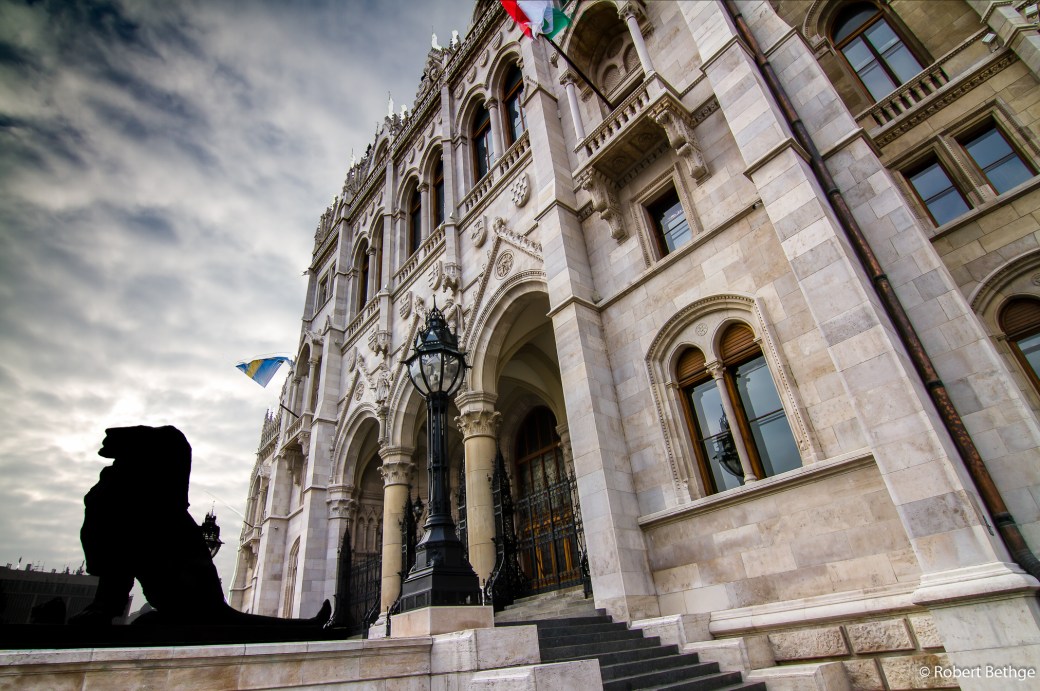 Got to Budapest a couple of days ago, today I headed out with my friend and host, Eva Kleyer, a professional tour guide. A grey afternoon early December doesn’t lend itself to taking great photos, but the light was improving and I was able to squeeze out a couple of nice shots.

This is the Hungarian parliament – a building of massive proportions! Measuring 268 m (879 ft) by 123 m (404 ft), it’s not only Budapest’s largest building, it’s also the highest (obviously, there are no high-rises in Budapest). Built between 1885 and 1904 in Gothic Revival style using 40 million bricks ad 40 kilograms (88 lb) of gold, it’s Budapest’s major landmark, situated directly at the river Danube.

As we came around the corner, the sun was casting a nice silhouette of the lion statue sitting in front of the parliament entrance. I couldn’t quite get the angle I wanted, since a security guard was eyeing me with suspicion.

Budapest is famous for its cafes. They can be quite spectacular, indeed. This one, Alexandra Café (also known as Bookcafé) was once built as a casino, then it was used (abused?) as a department store and now it’s the cafe of a large, american-style bookstore. This website has a list of the most beautiful cafes in Budapest.

Here is another one, spectacular lighting…if I just remembered where it was!

Budapest has many superlatives to offer…what about this one: the world largest Ferris wheel…standing 65 m tall at Erzsébet tér.

I’m not much of a Christmas person, but even I couldn’t help liking the Christmas decoration in Budapest. Very tasteful…