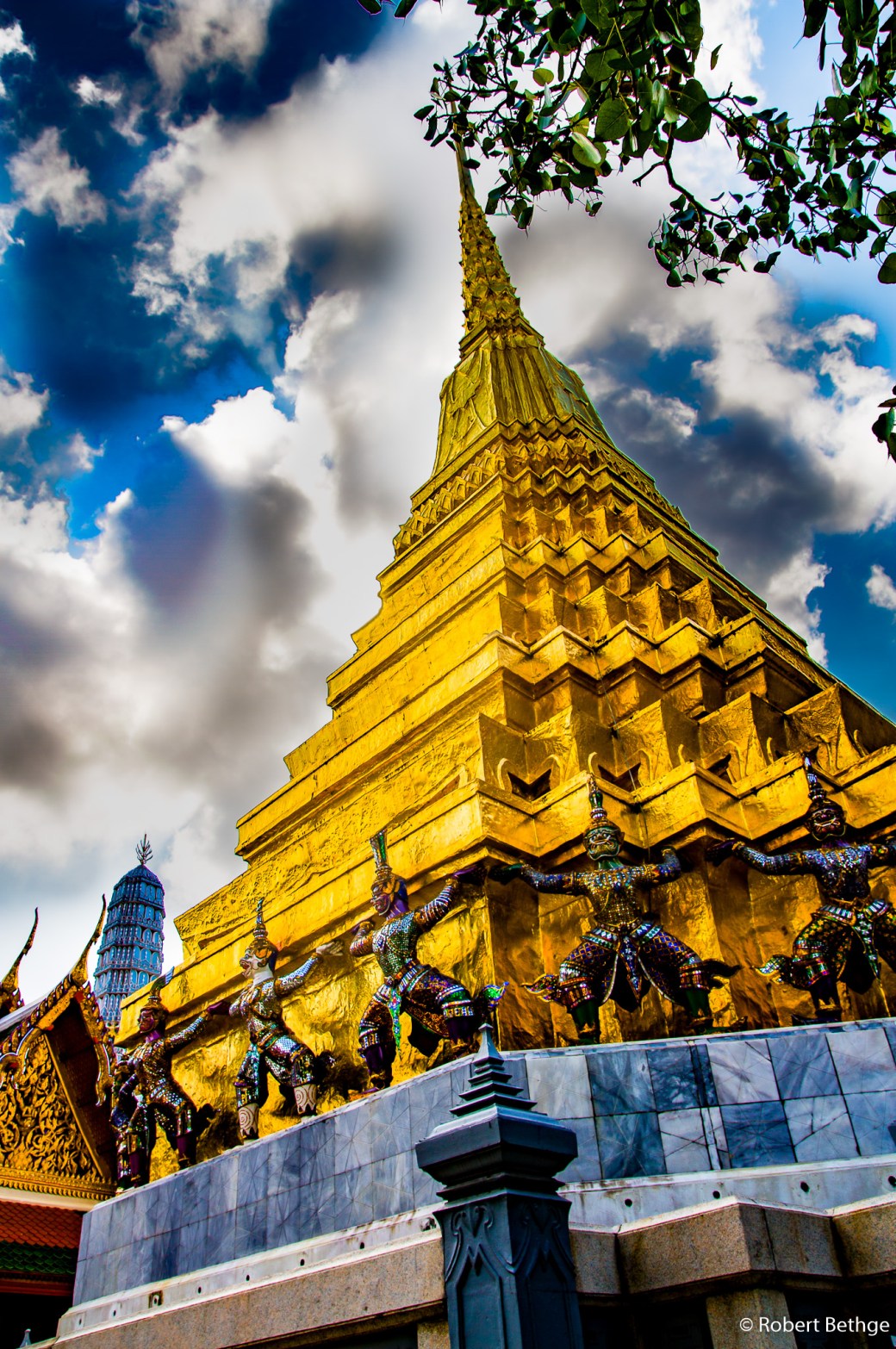 After having Wat Arun almost all to myself by getting up early and being at the gates when the doors open, I thought I’d do the same for my visit of what is undoubtedly one of the most famous tourist attractions in Thailand: The Grand Palace in Bangkok, also called Royal Palace, or Phra Borom Maha Ratcha Wang in Thai. I thought if only I’m going to be at the gate when the Palace opens, not too many other tourists will be there, competing with me for the best spots to take pictures. Yeah, right… I couldn’t have been more wrong! First the Grand Palace opens rather late, at 8:30 AM, which is not that hard to make by most tourists, then it took me a lot longer to get there than I thought: I always get a kick out of using the same public transportation the locals use, in this case buses. It turned out though that changing buses in Bangkok often is all but a trivial task. Often you have to walk quite a bit to catch the connecting bus, sometimes you have to cross dangerous, high traffic roads without lights for pedestrians and then it’s run and pray…. And did I mention that they drive on the “wrong” side of the road in Thailand??

Anyway, I made it there in once piece, but by the time I finally get to the Palace, I already see lots of tourist groups, led by eager guides holding up these little flags or stuffed animals so that their sheep….excuse me…tourists wouldn’t lose them, all heading for the gate. Hundreds, if not thousands! Bye bye, having the Palace all to myself! At this point I decide to jump right in and swim with the flow…which carried me to the ticket office.

Here the next shock: While the entrance fee to Wat Arun was a modest 50 Baht (a bit more than 1 Euro), it took a royal fee of 500 Baht (more than 10 Euro) to see the quarters of Your Highness. Everything being so cheap in Bangkok, I wasn’t even sure I had that much on me! Well, I had, and taking the bus home won’t break the bank. So here I am, sweaty already in the long pants you need to wear to enter into any temple or palace in Thailand, ready to explore this strange world…

The Photo Tour Begins: Swimming with the Masses in the Grand Palace in Bangkok

After having seen Wat Arun, which is under construction and made a bit of a downtrodden, maybe even neglected impression, it became clear to me very quickly that this, the Grand Palace in Bangkok, is Thailand’s crown jewel. While Wat Arun is beautiful, the Palace is overwhelming! Gold everywhere! Also the size of the entire complex is impressive! It took me more than three hours to go through. Overwhelming can also be the masses pushing through. Chinese New Year coming up next week didn’t exactly lower the visitor number, I figured.

The crowd became particularly bad when entering the Temple of the Emerald Buddha, where taking photos unfortunately is not allowed (another difference to Wat Arun, where you can take photos everywhere). While pushing through with the crowd, a security officer yelled at us to take off our shoes, so I quickly removed my shoes and left them at the corner of the temple. When I came back out, I had of course forgotten where my shoes were! This reminded me of a scene of “Slumdog Millionaire”, were the boys make a living by stealing shoes from unsuspecting tourists. Had I become a victim of them? Or just a victim of my own bad memory? More likely the latter, I thought, and kept looking for my shoes, sometimes “swimming” against the never ending current of visitors on my socks. Eventually I found my shoes, there were waiting for me patiently where I had taken them off after being yelled at by the security personell. 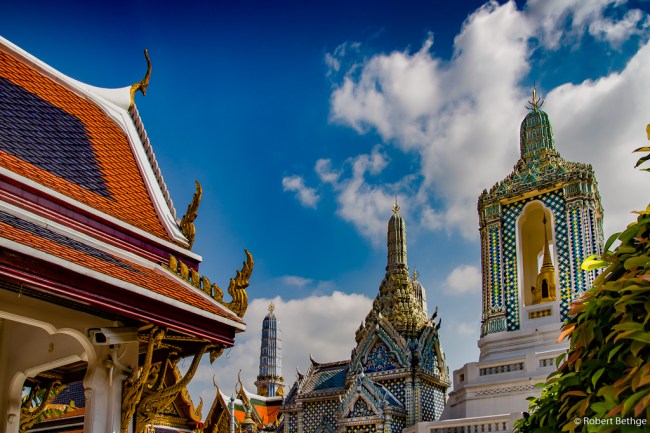 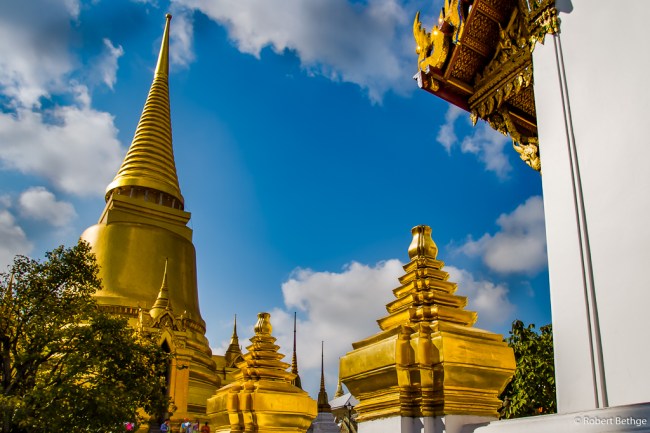 By the time I had finished my photo tour of the Royal Palace, I was sporting a nice sun burn! And still the masses were streaming in. After leaving the complex of the Palace, I tried to walk to the nearby pier to take the boat back to the Sathorn area, where I was staying, but the crowd had become so thick that at times I was afraid of being pushed into the water. So I decided to avoid the water front and went back to a small park in front of the Palace to eat a mango I had bought from one of the old ladies offering small snacks. What a relief! Then I took the bus to get the heck out of this area!

So is the Grand Palace in Bangkok worthwhile visiting? Absolutely! It’s more than that, it’s a must-see! If there is ONE site you visit in Bangkok, that is the one. But try to avoid it around Chinese New Year!